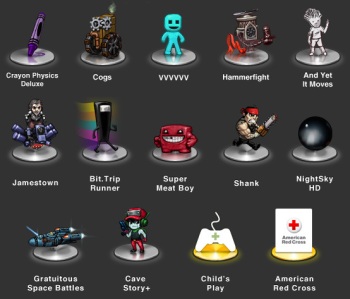 If you've been living under a rock for the past five years, the Humble Bundle is essentially a "pay what you like" bundle of (often indie) video games that raise money for charity. Originally, when buying the bundles, players were simply given Steam keys that they had to manually redeem, however, about a year ago the Humble Bundle launched something called "OAuth", that would allow users to directly redeem games to their Steam Account. Now, the Humble Bundle team has announced that Steam is dropping support for OAuth, which means we're back to CD-keys.

So, why is this such a big deal? While most Humble Bundle purchasers are happy to throw a couple of bucks towards a good cause in return for some awesome games, some less-scrupulous folks take developer goodwill as an opportunity to turn a profit. Back before OAuth, it wasn't uncommon for people to purchase up a whole bunch of Humble Bundles at the lowest possible donation, and then, after a week or a month when the games returned to their regular prices, sell them on third-party CD key websites for a profit.

When OAuth came around, it made it impossible for people to buy Bundles en-mass to sell later for profit. With Steam dropping OAuth support, could we be returning to the days of shady CD-key re-sellers taking advantage of a charity?

The Humble Bundle first kicked off back in 2010, when it was known as the Humble Indie Bundle and featured only indie titles. However, in the five years since, we've seen even AAA publishers such as THQ and EA Games join in.

The current Humble Bundle is a colaboration with charity speedrunners Awesome Games Done Quick, and features some PC gaming classics such as Duke Nukem 3D and Oddworld: Abe's Oddysee.