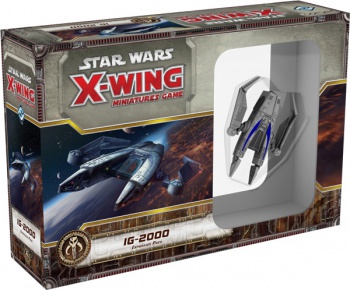 The Star Wars: X-Wing Miniatures Game will soon get an IG-2000 fighter craft, although few bounties will survive the experience.

The official X-Wing Miniatures Game may put a strain on the wallet at times, but hot damn if does provide beautiful additions to your gaming shelf in return. The latest expansion from Fantasy Flight Games should be no exception, especially for those who enjoy references to the classic EU - a IG-2000 Aggressor craft, piloted by the bounty hunter IG-88.

Fantasy Flight could probably get away with just churning out high quality ship models at this point and be successful, but the IG-2000 also has a significant gameplay presence. Just as in Star Wars lore, the Aggressor is an assault fighter designed specifically around space combat, and is loaded to the brim with power cores and weapon systems. Its stat array includes three Attack, three Agility, four Hull, and four Shields, while featuring focus, target lock, evade, and boost actions in the action bar. That makes the IG-2000 the first large-base ship to include boosting natively, which certainly helps give it an edge.

On top of that, the IG-2000 maneuver dial provides the Aggressor with some significant advantages. This expansion provides the ship with every single straight maneuver, bank, and turn at speeds of 1 or 2, with only a few red high-speed maneuvers to slow you down. That means the Aggressor always has at least one or two solid maneuver options, making it harder for opponents to predict future moves.

The expansion also comes with four IG-88 droid pilots, each with unique abilities like shield regeneration or free evade actions. (Side note: As per Lucasfilm's past comments, I'm going to assume this means this means the insane IG-88 backstory is now official canon.)

The only real downside to the ship we can see so far is that it only offers a forward firing arc. In other words, if you overshoot your opponent, there are no rear blasters you can use to shoot down other targets. Regardless, the IG-2000 should prove a formidable addition to X-Wing Miniatures when it launches, with an expected release date of Jan. 16 2015.