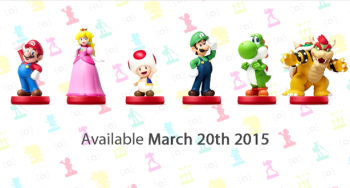 Nintendo's latest wave of new and redesigned amiibos will be arriving in time for the launch of Mario Party 10.

Nintendo's amiibo line has been a smashing success, to the point that it's become very hard to find some of them on store shelves. And that was just for the initial Smash Bros launch - now Nintendo has revealed a new spring line-up of collectibles: Robin, Lucina, Pac-Man, Ness, Charizard, and Wario. Not only that, fans can expect a new line of redesigned Mario amiibos to be released in conjunction with Mario Party 10.

On March 20, redesigned amiibos of Mario, Luigi, Yoshi, Peach, Bowser, and the new Toad amiibo will reach store shelves. Compared to the Smash Bros line, these figures will be in more casual position than combative, like how Mario is waving his hand instead of shooting a fireball from it. While these redesigns will arrive alongside Mario Party 10, Mario-related amiibos for Smash Bros will still be compatible with each game. The only downside is that amiibos won't be able to carry save data for both Smash Bros and Mario Party 10 - players will have to pick one or erase the data.

Activating an amiibo in Mario Party 10 unlocks quite a few features. First of all, it provides access to "amiibo Party" mode, opening up character-specific boards that relating to that amiibo's abilities (the Mario board includes mushrooms, the Luigi board includes vacuums that suck up coins, etc). Players will also be able to attach tokens to their amiibo avatar that gives them an in-game boost, like extra dice during your turn.

If the first wave of amiibo were anything to go on, these latest editions will probably spark yet another scramble to get your favorites before they disappear. Which ones will you be tracking down?