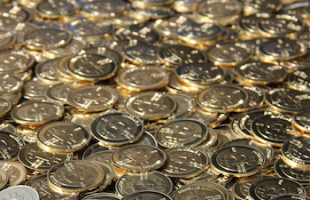 Bitcoin is officially in free fall, although "doomed," might be a bit too strong for now.

After $5 million worth of Bitcoin was stolen from exchange giant Bitstamp last week, the price of the popular, anonymous, and sometimes unpredictable cash dipped below USD $300. As of this afternoon, Bitcoin's price now sits at roughly $180 -- up from the day's low of $170.08, and down from the opening price of $226.94. That's a 20 percent price drop in one day of trading.

(All prices come via CoinDesk, but there are several exchanges and trackers available.)

What's causing Bitcoin to drop? CNBC was told there's no concrete explanation, but the most likely culprit is the Bitstamp heist from last week. If an institution that promises to safeguard your unregulated digital currency is fleeced of $5 million? That's sure to rattle a few investor cages.

But this is down period that Bitcoin could easily survive. Despite hitting highs of over $1,000 in 2013, Bitcoin has already had its fair share of crisis. As Vox points out, the value of Bitcoin once dropped early on from $32 to $2.

Bitcoin, even after getting love from the likes of Microsoft, and legitimacy from certain kinds of financial bodies, is still new, and still a little scary for the uninitiated.

Meanwhile, Dogecoin is sitting pretty at about 11 cents (USD) per 1,000. Make it rain. Wow. Much wealth.