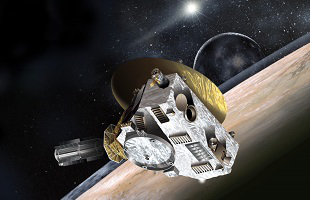 The New Horizon spacecraft wakes up more than seven years after launch.

Another of NASA's long term planetary exploration projects is coming back online, as the agency's New Horizon spacecraft has awoken from its third and final hibernation cycle.

And what's powering the systems on-board New Horizon? It's the same CPU that powered the Sony PlayStation you bought way back in 1994-95.

The same base CPU -- a MIPS R3000 model -- that powered Sony's first console is also controlling thrusters, guidance, and other systems in a NASA probe. America's finest didn't just tear this out of a PSX with a broken controller port, however, as there are some differences. While the PSX uses a 33 MHz R3051 CPU, New Horizon uses a 12 MHz Mongoose-V CPU. The Mongoose-V, according to MIPS owner Imagination, is a "...radiation-hardened version of the MIPS R3000 CPU," built by Florida-based aeronautics contractor Synova.

Console tech aside? New Horizon's long-term mission is to study Pluto, its moons (Charon, Hydra, Kerberos, Nix, and Styx), and other bodies found in the Kuiper belt. After launching in 2006, and doing a close fly-by of Jupiter in 2007, New Horizon has been in various stages of hibernation, until waking up earlier this week.

NASA isn't in the business of designing its own CPUs, which is why re-purposed hardware is usually found in its spacecrafts. NASA's forthcoming Orion spacecraft uses several of the same IBM CPU model that's found in Apple's iBook G3, while SpaceX has Nvidia Tegra chips on board the Dragon V2.

There's no official confirmation on if NASA included playable copies of Crash Bandicoot and Final Fantasy VII on New Horizon, in case the probe is found by bored, game-less alien life.

New Horizon isn't the only NASA probe exploring the far corners of our solar system. The Dawn spacecraft, which is set to explore the dwarf planet Ceres, should reach its destination before the start of Spring.