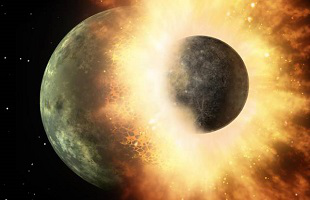 New study says that meteorites are planetary byproduct, not the other way around.

Astonomers have long thought that meteorites played a role in the formation of planets billions of years ago (in our solar system, anyway), but MIT and Purdue University are looking to change that scientific narrative.

A new study from the two schools, with MIT's Department of Earth, Atmospheric and Planetary Sciences playing a significant role, says that meteorites are the result of planetary formation, not the causation.

Meteorites are filled with all sorts of rock and metal, and they also typically have chondrules. These small, glass-like particles have been called the building blocks of planetary formation, but MIT disagrees. "...researchers at MIT and Purdue University have now found that chondrules may have played less of a fundamental role. Based on computer simulations, the group concludes that chondrules were not building blocks, but rather byproducts of a violent and messy planetary process."

These chondrules, according to MIT, were formed after planetary matter was ejected from a planet, likely due to some sort of massive collision (like the protoplanetary impact depicted above). When such a collision occured, molten matter was shot out into space, where it cooled and formed the meteorites we study today.

The research that led to this new conclusion focused on how early planets and large bodies (like the Moon) formed. Based on simulation data, Johnson and others involved determined that larger bodies formed within the first 10,000 years of a given solar system, give or take a few thousand years. This formation timeline would pre-date chondrules, which rules them out as planet-building material within the study's parameters.

"This tells us that meteorites aren't actually representative of the material that formed planets - they're these smaller fractions of material that are the byproduct of planet formation," said MIT postdoc Brandon Johnson, who is involved in the study. "But it also tells us the early solar system was more violent than we expected: You had these massive sprays of molten material getting ejected out from these really big impacts. It's an extreme process."

So while the meteorites in our solar system are still older than recorded time? They probably didn't form the ground you stand on.