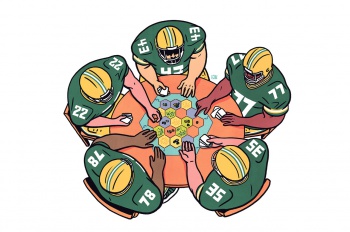 When not at practice or playing football, the Green Bay Packers host an incredibly competitive Settlers of Catan gaming night.

When your entire career could be summed up as "playing games competitively", it's hard to imagine relaxing with more of the same. But for the past two months, that's exactly what the Green Bay Packers have done, with a twist - gathering around the tabletop for surprisingly intense sessions of Settlers of Catan.

It all started when starting tackle David Bakhtiari introduced Catan to the team. "At first we're like, 'What the hell is this?'" starting center Corey Linsley said. "'Brick? Wool? What kind of game is this?'" That stage didn't last for long, as the team quickly embraced Settlers of Catan and its emergent strategies. Now on any given day in the locker room, you'll find Packers talking Catan strategies or making plans to meet for an evening game.

"We are completely addicted to it," tight end Justin Perillo said. "we play it whenever we can."

Settlers of Catan's emphasis on non-violence, resource trading, and city building make it a light-hearted tabletop game for the whole family. A tabletop game with the Packers, however, can be far more cutthroat. "Everyone is super competitive, so when you first start playing they don't tell you all the rules," So you start your moves and they say 'well, actually you can't do that' and it sort of screws you in the game. They get very salty."

All told, Settlers is a great off-field bonding exercise, but what helped board games click in particular? It's partly seasonal - Green Bay is the smallest NFL town, which doesn't leave a lot of activities to take part in during the winter season. But the Packers have also fully embraced Catan's mechanics and strategies to the point of constantly dissecting them at and away from the tabletop. "I was just trying to play some music - some Pearl Jam," center Garth Gerhart noted "and [Bakhtiari] wouldn't let me. He wanted to hear the players talk and strategize. He was very serious. They take it to a different level."

And the best part? As knowledge of the Packers new hobby spreads, it's bringing attention to the local gaming store. At Green Bay's Gnome Games, Settlers of Catan sold out over the Christmas season while encouraging all kinds of new customers to stop by. "When the average person sees the Packers doing it, it becomes a safe thing," Gnome Games' Pat Fuge said. "That it's not the kids in mom's basement anymore."