Microsoft wants your living room to be your operating environment.

Called Windows Holographic, Microsoft's latest venture is centered around its own HoloLens headset. The HoloLens is a wearbale computer, as the headset contains a CPU, GPU, holographic processor, and the various sensors needed to pull of such a feat. It reminds me of Google Glass, but taken to the next logical step. (And the hardware looks way cooler.)

Windows Holographic places an operating system completely around you, as the HoloLens visor shows you what its hardware is projecting. You'll be able to hear holograms behind you, so those not in view will still be made spatially aware. 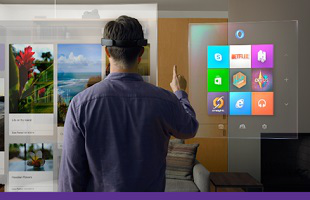 While Windows Holographic is certainly experimental at the moment, its apps won't be. Because of Microsoft's Universal Apps initiative -- the same software strategy that allows Windows desktop software to run on mobile, and the Xbox One, and vice versa -- will extend to WinHolo (my nickanme, not theirs). This means developers creating apps for Windows 10 will be able to push those same apps to the HoloLens hardware, with some (hopefully minor) code-tweaking.

Much of Windows Holographic and the HoloLens hardware dates back almost seven years, according to today's Microsoft presentation. The initial hologram talks led to the development of Kinect, which undoubtedly plays a part in Microsoft's new wearable hardware.

While basic Windows come to mind, Microsoft has already stressed that Windows Holographic will extend to all the same reaches as Windows 10. This means apps and games like Skype and Minecraft will be coming to augmented reality, too.