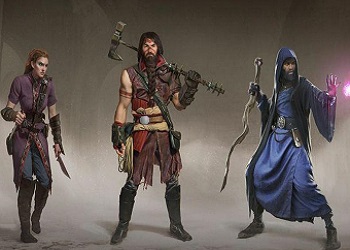 Game designer Paul Neuarth has opened a new studio and announced an upcoming Kickstarter aimed at creating a spiritual successor to Ultima Underworld.

Easily one of the great classics of the RPG genre, Ultima Underworld is considered by many to be the original first-person action RPG. Pretty much any game you can think of that includes real-time combat and a first-person perspective probably owes at least something to Blue Sky Productions' (later Looking Glass Studios) 1992 romp through the Stygian Abyss. Despite its big legacy however, the Underworld series itself was relatively short-lived. The first game received only one sequel before the franchise fizzled out and faded away. If Paul Neuarth and his studio OtherSide Entertainment have their way however, Underworld may soon live on through a new spiritual successor.

Said successor will be called Underworld Ascendant and, according to an announcement from OtherSide today, will make its way to Kicktarter next month starting on February 4th. While he's yet to release any details about funding goals, Neuarth stressed that making "a great game" requires "resources and effort." He would go on to say that he intends to craft a finished product that "retains the distinctive fantasy gameplay of the originals" while also "[pushing] forward with new innovations." A working prototype of Ascendant is apparently already running on PCs.

Neuarth, of course, was the designer behind the original Ultima Underworld and a co-founder of Looking Glass Studios. That background in mind, he described Underworld Ascendant as the culmination of a personal quest to revive the Ultima Underworld franchise. "Over the years I've tried without success to raise the Underworld series back up," he said. "Just now have the stars aligned so this can happen. I started OtherSide Entertainment [as] an indie studio to rekindle this classic." Suffice it to say we'll be watching Kickstarter closely come February 4th to see exactly what Neuarth and OtherSide have planned.