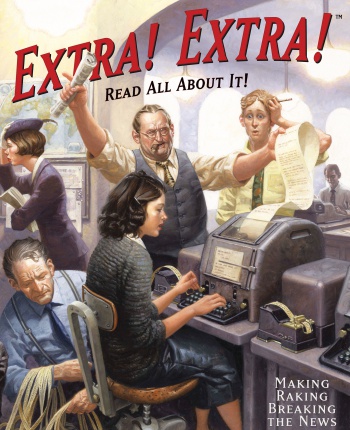 Mayfair Games, the publisher behind Settlers of Catan and Cones of Dunshire, is offering Extra Extra and Flea Market within the next two months.

Settlers of Catan is pretty fun, but if you find yourself playing it as much as the Green Bay Packers, it might be time to mix things with another tabletop game. Thankfully, publisher Mayfair Games has announced new Spring titles that aren't Settlers of Catan, Settlers expansions, or Settlers spin-offs. These two new games - Extra Extra and Flea Market - bring unique gameplay systems to the tabletop that can still be grasped within the span of a family board game night.

Extra Extra pits 2-5 players against each other as managers of fledgling newspapers. Your goal is to run the most successful publication, balancing your limited resources (money and reporters) to gather the stories and photos that will sell papers. Each newspaper has a specialty topic that rewards bonuses when you publish to your readership, or you can also turn to advertising to make ends meet. As a final twist, publishing first earns more points, but the game's winner will have constructed the most complete newspaper.

From the sounds of things, if this game isn't played with everyone shouting "What a scoop!" every ten minutes, it's probably being played wrong.

Alternatively, if the fast-paced reporter's life doesn't suit you, there's always the option of browsing the Flea Market. This dice game aims to recreate the experience of finding hidden treasures while digging through used goods. You play as a buyer's agent seeking to buy items as cheaply as possible, then resell them when the demand dice make them popular once again.

Flea Market is expected to launch in late February, while Extra Extra will hit gaming shelves in March 2015. In the meantime, Mayfair Games is keeping itself busy managing the Cones of Dunshire Kickstarter campaign.