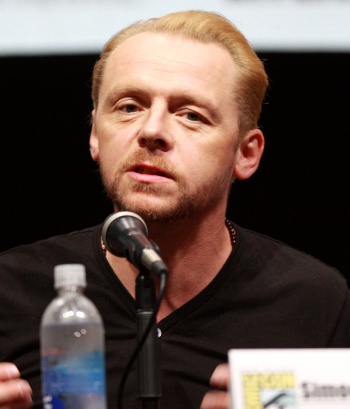 When not playing as Scotty, Simon Pegg will take time away from Engineering to write Star Trek 3's script.

The strange history of the upcoming Star Trek film just got a little more interesting. A mere month ago, we learned it would be directed by Fast & Furious' Justin Lin after Roberto Orci stepped down. Now it turns out that Scotty is helping out with the script - or to be more specific, actor Simon Pegg will be co-writing alongside Doug Jung.

Although best know for his acting work, Pegg certainly has lots of writing experience. He co-wrote the entire "Three Flavors Cornetto" trilogy of Shaun of Dead, Hot Fuzz, and The World's End, as well as Paul and Run, Fatboy, Run. Doug Jung, meanwhile, is known for his TNT series Dark Blue and was a writer and producer for HBO's Big Love.

Now what exactly Pegg and Jung will create for Star Trek 3 remains to be seen. The new film will reunite the entire rebooted Enterprise crew - including Chris Pine, Zachary Quinto, Zoe Saldana, and Karl Urban - for a new adventure. Having Pegg, Jung, and Lin working together on a sci-fi movie could be promising, and we'll see the result on July 8, 2016. Just don't be completely surprised if Scotty has a little more screen time than before.