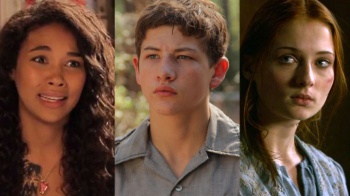 Game of Thrones actress Sophie Turner (Sansa Stark) will be portraying the younger version of Jean Grey in X-Men: Apocalypse.

X-Men: Apocalypse director Bryan Singer has just announced via Twitter who will be portraying the younger versions of iconic X-men Cyclops, Storm, and Jean Grey in the upcoming flick. Alexandra Shipp will play Storm, Tye Sheridan will star as Cyclops, and, perhaps most notably, Sophie Turner, Game of Throne's Sansa Stark, will portray young Jean Grey.

While Turner is obviously the most well-known, many may recall 18-year-old Sheridan from his roles in the 2012 coming-of-age drama Mud and Terrence Malick's The Tree of Life. 24-year-old Shipp is a relative newcomer to the big screen, and is perhaps best known as KT Rush in the Nickelodeon mystery show House of Anubis.

X-Men: Apocalypse is the sequel to last year's Days of Future Past, which involved a lot of freaky time-travel to retcon a lot of the more... questionable decisions of X-Men 3, including the deaths of Jean Grey and Cyclops. We don't know too much about Apocalypse, but we do know it will be set during the 1980's, around 10 years after the events of Days of Future Past.

Turner, Malick and Shipp will be taking over from Halle Berry, Famke Janssen and James Marsden, though at this point it is unclear what (if any) role the original actors will play in the new movie.