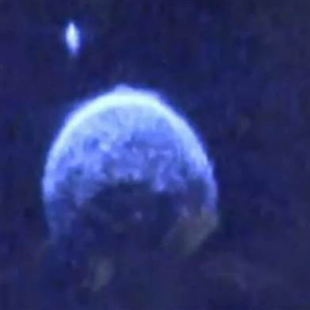 It's not everyday that a mountain-sized asteroid zips past the Earth. This morning however, that exact thing did happen. According to reports, an asteroid know as 2004 BL86 flew by the Earth today, coming as close as 745,000 miles to our tiny, insignificant dot of a planet. Our moon, for reference, is 238,900 mile away. The asteroid itself was about two-tenths of a mile wide and, observers indicated, had a rounded shape, boulders on its surface and even a small, orbiting moon. It passed closest to Earth at 11AM EST.

While BL86 has since moved on harmlessly, interested observers can still catch a glimpse of it today if they look for it in the right place, at the right time and with the proper equipment. Star-searchers in North/South America, Europe and Africa should be able to see it with strong binoculars or a 3-4 inch telescope tonight between the hours of 8PM and 1AM EST. Slooh astronomer Bob Berman advised observers hoping to spot the asteroid to "find the brightest 'star' in the sky," also know as the planet Jupiter. From there they should locate the star Procyon. The asteroid should be visible between those two celestial bodies for the majority of the evening.

This, of course, isn't the first time an asteroid has come close to the Earth. As scary as it is to think of, space rocks actually shoot by our world on a semi-regular basis. In 2014, for instance, a house-sized asteroid came as close as 22,000 miles to Earth. The year before that another one came even closer: 17,200 miles. It's also estimated that asteroids actually hit the Earth with force equivalent to nuclear bomb as often as twice a year. Considering the size of today's asteroid, we should consider ourselves lucky it just passed on through.