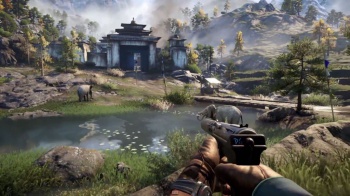 If you bought a Far Cry 4 CD-key from a third-party re-seller such as G2A or Kinguin, it may soon be removed from your account.

Update 2: Ubisoft has updated its official statement, saying that the stolen keys in question were purchased from EA's Origin platform using stolen credit cards. EA has confirmed that this is indeed the case.

Meanwhile, Kinguin has chipped in, claiming an unidentified Russian bought the keys, which were then offered to around 35 of the re-seller's 4000 merchants, and that it expects to refund approximately 148,377 euros to its customers.

Update: G2A, one of the other re-sellers involved in this situation, released the following statement via Facebook:

As some of you may already know, steps have been taken to remove games purchased indirectly from a publisher, via main marketplaces in the web. G2A.COM is not in any case responsible for any of these procedures. However, we are well aware of this process and will do everything possible to compensate for that. For users who have made transactions without G2A Shield, we will check if the corresponding merchant was responsible for the withdrawal of the code. If so, these users will get a compensation. Any user who used G2A Shield affected by the current process will get either a new code for the game or the money back. G2A.COM will make every possible exertion to prevent this kind of procedures in the future and exclude merchants responsible for such incidents from the marketplace.

Original Story: Buying CD-keys from third-party re-sellers (IE: anywhere other than Steam/uPlay/Origin or a retail store) always comes with an inherent risk, just as buying anything on eBay. However, once you've paid for the key, had your game client accept it, and are able to boot up the game, you wouldn't really expect for it to be suddenly taken away. Well, if you bought a copy of Far Cry 4 from a re-seller such as G2A or Kinguin, that may be exactly what is about to happen.

Ubisoft has released an official statement to Game Informer confirming earlier forum reports of users having their games removed from their libraries. "We regularly deactivate keys that were fraudulently obtained and resold," said the representative, adding "In this case, we are currently investigating the origin of the fraud and will update customers when we have more information to share. In the meantime customers should contact the vendor from whom they purchased their key."

Kinguin, one of the re-sellers whose keys are being deactivated, had the following to say via chief marketing officer Bartłomiej Skarbiński: "The current case raised by Ubisoft is surely unfair towards the players. The banned game copies in question were acquired through licensed wholesale distributors and as such the origin of the 'keys' is the publisher himself."

"We believe Ubisoft had no legal basis for its action," he continued. "They did it just because they simply can. Kinguin of course is not going to challenge Ubisoft in court as we are not match up for these giants. We will continue to focus on customer's satisfaction and our customers know we have never let them down."

While I am all for publishers seeking out and punishing shady re-sellers who obtain keys by illegitimate means, this kind of practice seems to only punish the poor users who don't know any better. The re-seller has already gotten his money from the sale, and is under no obligation to offer his customers a refund when the publisher suddenly de-activates his key. It's a low-blow to fans who are sure to think twice about purchasing another Ubisoft title in the future.

So, this is just a warning to our readers: always make sure you buy your digital games from an officially authorized storefront - just to be 100% sure it won't be yanked out of your library later on down the line...