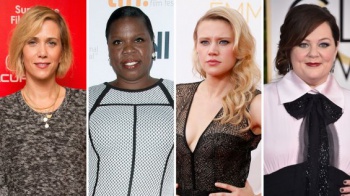 Paul Feig knows who to call for the all-female Ghostbusters cast.

Last October, Bridesmaids director Paul Feig confirmed he was attached to a very ambitious project: A Ghostbusters reboot starring an all-female cast. Outside of the obvious excitement for a new Ghostbusters movie, the real question was which actresses would ultimately don proton packs and fight the supernatural. While negotiations are still underway, four strong candidates have emerged: Kristen Wiig, Melissa McCarthy, Leslie Jones, and Kate McKinnon.

Wiig and McCarthy have both worked together before, most notably for their breakout roles in Bridesmaids. Jones and McKinnon, meanwhile, are current players on Saturday Night Live. The four are expected to sign on for filming this summer in New York City. While The Hollywood Reporter states that negotiations are still underway, Feig himself tweeted an image of the cast suggesting that the decision is much farther along.

The original Ghostbusters series followed a team of misfit scientists turned ghost exterminators who investigate and purge supernatural activity throughout New York. Attempts to produce a third movie were ongoing for years, until Harold Ramis tragic demise seemingly put a stop to it. At the moment, this new film's plot is expected to have no connection to the previous two movies.

Ghostbusters - The Board Game Review - Who Ya Gonna Call? Lizzy Finnegan 2 Comments
Comments on