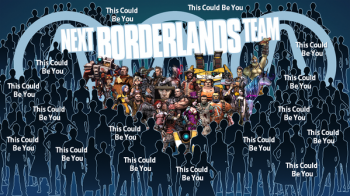 Gearbox's Randy Pitchford confirms that work has not yet begun on Borderlands 3.

These days, the name Gearbox Software has become synonymous with two things: the infamously awful Aliens: Colonial Marines and the Borderlands series. Some would even argue that Gearbox is Borderlands, and with the stellar Borderlands: The Pre-Sequel now behind us, many assumed work had already begun on a new title. However, Gearbox's man with the plan Randy Pitchford has told fans at PAX South that work on Borderlands 3 hasn't actually started, although he is keep to begin.

Pitchford went on to say how his company was in the process of actively recruiting new talent for the as-of-yet-unannounced new Borderlands game. "If you are in the industry and you think you can help us, we want you to help us. We want to get started on a new Borderlands game," he said, adding "There's literally nothing to tell, but we're ready to start."

For a bit more Borderlands news, Gearbox also announced the third DLC pack for The Pre-Sequel, which is called The Lady Hammerlock Pack and will feature Sir Hammerlock's older sister, Aurelia, as a playable character. It also teased a fourth Borderlands: The Pre-Sequel DLC pack which will involve "going in the mind" of Claptrap.