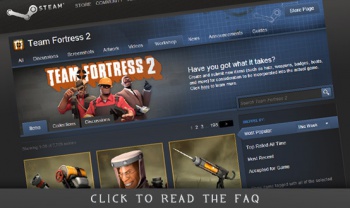 Steam community content creators are now able to create (and earn money) from items made for non-Valve titles.

Since its humble beginnings back in 2011, Steam's community content program has paid out over $50 million to aspiring content creators, Valve announced today. The "Steam Workshop" allows creators to make items for Valve-published games such as Team Fortress 2, Counter-Strike: Global Offensive and DoTA 2, which, if incorporated into their respective games, lets their creators share in a portion of the profits.

Valve said that the total figure is close to $57 Million, and was earned by over 1,500 contributors spread out across 75 countries.

To celebrate and expand upon this success, Vale has also announced that Steam content creators now have the ability to create and sell items for non-Valve games, via new, "Curated Workshops". The first games to feature these new workshops will be Dungeon Defenders: Eternity and Chivalry: Medieval Warfare. Valve expects more games will join the program in the coming months, and just like with official Valve games, a portion of profits from community items for these games will go to their creators.

Lastly, for those of you who are actually out there making maps and items for multiple games, and are having trouble keeping track of where all your money is coming from, Vale is also launching a set of new tools that enable contributors to view real-time sales data for their items as well as view detailed per-item revenue breakdowns and historical statements.