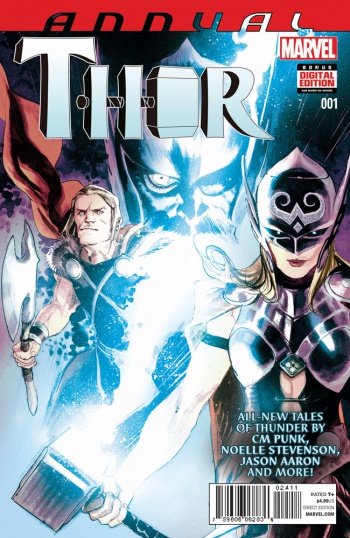 Remember that bit in Thor: The Dark World where Odin offers to make his son king, but Thor turns it down? That was a fairly predictable choice... but wouldn't it be cool to see Thor actually on the throne? Thankfully it's something comic book fans don't have to imagine - "King Thor" will be the subject of one of three stories featured in this month's Thor Annual #1.

Written by Jason Aaron with art from Timothy Truman, one of Thor Annual's tales shows a future where Thor rules Asgard. His granddaughters, the "Girls of Thunder", seek the perfect present for his birthday but it will be a doozy - a new Garden of Eden. It's not clear whether King Thor will fit into the character's current ongoing series or if this is an off-the-cuff "What If" experiment. But even if that's the case, that image of an aging Thor with a missing eye is an intriguing visual.

Thor Annual #1 can be purchased from comic book stories everywhere Feb. 25, 2015 for $4.99. That's a fair value for three standalone Thor stories, and a nice way to dip into the series if you haven't been following monthly issues.