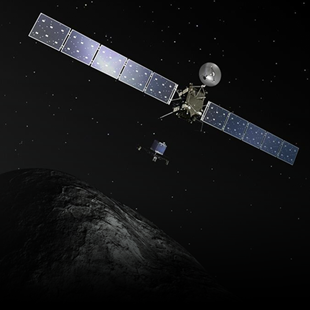 The European Space Agency believes its Philae comet lander might have enough solar exposure to recharge by May or June of 2015.

Back in November 2014, the European Space Agency attempted an ambitious mission that ended with somewhat mixed results. The organization managed to successfully drop the lander Philae onto the comet 67P/Churyumov-Gerasimenko; a significant first in the history of human space exploration. Celebrations were somewhat dampened unfortunately, by a rough touch down that left the Philae's solar panels out of the sun, draining its batteries faster than expected. With the lander effectively disabled and its exact location unknown, ESA scientists were initially unable to determine if and when it would be usable again.

It would now seem however that the agency is making progress in answering that question. According to a blog post, the ESA may have determined a rough location for the Philae lander and, in turn, believes it will start receiving enough solar exposure to function beginning in May or June of this year. The ESA report stated that the lander may actually collect enough power to boot up as early as March but won't receive "enough solar illumination to use its transmitter." Without the transmitter it can't communicate with the Rosetta space probe used to launch it.

The agency was also careful to stress that it will take some time before it's "ready to do science again." Not that that's stopping the ESA from making plans for the comet-grounded robot. "We are already discussing and preparing which instruments should be operated for how long," said project manager Stephan Ulamec. None of the difficulties that the ESA's had with the Philae mission should, of course, take away from how much the organization has achieved. If anything, it should just serve as a reminder about how difficult working in space can be and how monumental an accomplishment this actually is.