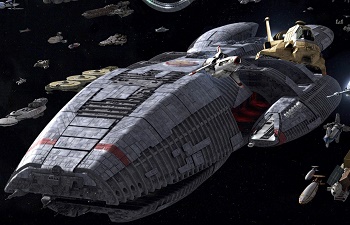 The LARP group "Project Exodus" will hold a five day event next week based aboard a retired German destroyer.

LARPing, at its core, is about taking an experience that cannot exist in our humdrum reality and giving it life through a group's collective willingness to pretend. As strong as the imagination can be however, there are still limits to what even the most enthusiastic live-action role-players can accomplish on their own. For instance, what do you do when your franchise of choice is centers on an aging warship fighting a hopeless battle against impossible odds? The answer, it would seem, is you get yourself some government assistance.

That, at least, is what one German LARP group did in its quest to host the ultimate Battlestar Galactica event. Dubbing itself "Project Exodus", the group will be launching "an educational live role-playing game" on February 8th using a retired German destroyer and funding from the country's Federal Agency for Civic Education. It's the group's hope that the event will give participants a chance to discover "hidden or repressed personality aspects" that allow them to more deeply analyze "the narrative structure" of the 2003 Battlestar Galactica television series and its "analogies to western societies from [September 11th, 2001] to today."

The event will last five days total, with two-and-a-half of them committed to the actual live-action role-playing. 80 participants have paid to be involved, many of whom will be given costumes and props based on their roles. During the game, the LARPers will be tasked with crewing a space freighter named the Hesperios which, after picking up an escape pod, is pulled into the war between the Cylons and the Twelve Colonies. As awesome as this is, it's worth noting that this isn't the first time that BSG LARPers have pulled off an event like this. Another Swedish group, The Monitor Celestra, did something similar with a retired battleship back in 2013.