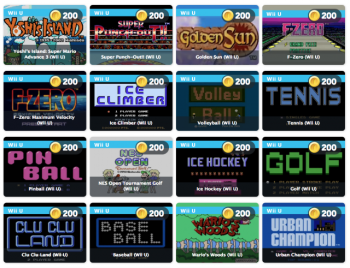 Club Nintendo may be going out, but it's going out with one hell of a bang.

Earlier in the year, we reported on the somewhat-sad news that long-running Nintendo loyalty program, Club Nintendo, would be shutting down for good this year, to be replaced with a new program. At the time, Nintendo promised to add "dozens of downloadable games and a limited quantity of exclusive reward items" to the program's catalog, to give fans plenty of options to spend their excess coins on. Today Nintendo delivered on that promise in a big way, adding a whopping 117 games , and several new physical rewards to the program.

What's more, while the downloadable games that had been offered on the program in the past were mere random spatterings from the 3DS and Wii virtual console, this last big push includes full 3DS and Wii U titles, for as 600 coins. Some of the most notable titles included The Wonderful 101, Super Mario 3D Land and Kid Icarus: Uprising, all of which are fairly recent, full-priced titles.

As for the physical rewards, it's a slightly bigger selection of the usual "random items with Nintendo branding", such as a The Legend of Zelda: Majora's Mask 3D Messenger Bag and a Retro Mario T-Shirt. As has always been and always will, Grill of with Ultra Hand is still standing strong among all the other offerings.

The downloadable titles are the real winners here, and are so incredibly varied and cheap that most users should be able to get rid of their remaining coins, and pick up some titles they don't have in the process. There's way too many to list here, so please go and check em out for yourself.

As a reminder March 31 is the last day for new Club Nintendo sign-ups and the last day for all members to earn new coins. Those coins must be spent by the end of the day on June 30, and any game download codes will need to be redeemed by July 31.