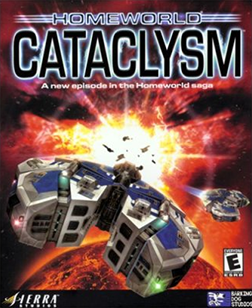 Gearbox's Homeworld Remastered Collection will be releasing later this month and the excitement among fans of the classic franchise couldn't be higher. For some however, the release of the collection is marred by the persistence of a substantial exclusion. While the Remastered Collection contains both the first and second Homeworld games, it will not include the pseudo-sequel Homeworld: Cataclysm. Addressing Homeworld: Cataclysm earlier today, Gearbox COO Brian Martel affirmed that the studio "would love" to do something with the game but is being obstructed by some unfortunate problems.

"The [source] code," he said. We don't know where it exists." Developed by Barking Dog Studios, the source code for Cataclysm has been missing for years, with no one seeming to know if a complete copy even exists anymore. That being the case, Gearbox's options with the game are limited. "It really comes down to finding the original source code. If somebody out there has it, we would take it and make sure we at least released the classic version."

The big question after that, of course, is whether or not the studio would take things any further. While some fans would likely be happy just to have a digital edition of the game optimized for modern PCs, most would probably still prefer to see an HD remaster similar to what Gearbox has done with Homeworld and Homeworld 2. Touching on that, Martel was less optimistic. "Frankly," he said. "I'd be surprised if we could actually do the kind of work that we've done with the remasters for Cataclysm." Even so, he didn't completely shut down the possibility of a remastered edition of Cataclysm. Even without the source code, Martel indicated that "there are some clever things [Gearbox] might be able to do if there was enough interest."