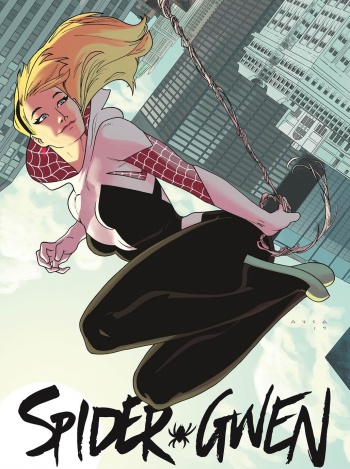 Marvel Comics has revealed a glimpse of Spider-Gwen #1, the highly-anticipated spin-off to Edge of Spider-Verse.

For decades, Spider-Man character Gwen Stacey was only known for one thing - being the "one true love" of Peter Parker who died tragically. But soon, we may know Gwen a little better as a far more interesting superhero. We first met "Spider-Gwen" in the Edge of Spider-Verse series, introducing a parallel universe where Gwen was bitten by the radioactive spider instead of Peter. Now Marvel is expanding the concept into a full-blown ongoing series, and the following preview art gives readers an idea of what to expect.

In Spider-Gwen, Gwen Stacey is working to find the same balance Peter Parker did in juggling high school, superheroics, and her personal life. She'll be portrayed as a smart, charming young girl who plays drums in a punk rock band when not using her super-strength as the Amazing Spider-Woman. But just as Spider-Man had to keep his identity secret from NYPD Chief George Stacey, Gwen must do the same - a difficult prospect considering Chief Stacey is her father.

"It's a rare character that gets the public outcry that Spider-Gwen got," Senior Editor Nick Lowe said back in October. "From the sell-out of Gwen's first appearance to the groundswell on Twitter we're excited to bring more Spider-Gwen into the world with the creators who started it all!"

While Marvel's preview art doesn't include dialogue, it's pretty clear Gwen is having trouble balancing her various roles. As she fights a knife-wielding criminal, she also conducts a phone conversation with a friend and ignores an incoming call from her father. It's a fairly simple twist to the usual Spider-Man formula with a lot of potential for future storylines, giving me hope for this series.

Spider-Gwen #1 will hit comic book shelves on Feb. 25, 2015. Until then, you'll probably find me humming the Spider-Man theme song to Spider-Gwen lyrics.