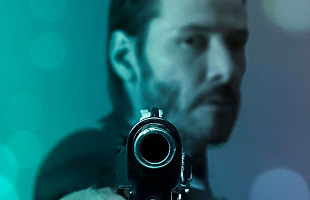 Several trips to The Continental Hotel appear to be in order.

Did you enjoy the puppy-avenging action stylings of John Wick? I certainly did, in no small part to the cast including several actors from The Wire...and Keanu being Keanu, of course. Lionsgate is impressed enough by its film (and its theatrical success) to want Mr. Wick to star in a full-blown franchise.

During a Lionsgate earnings call earlier today, CEO Jon Feltheimer said his studio views John Wick as a "multiple-title action franchise." So, assuming the next John Wick film is a success, we could very well see Keanu Reeves-John Wick become the next Damon-Bourne, or James Bond.

This news comes several days after Wick writer-director duo Chad Stahelski and David Leitch said they were working on a sequel. "We're in development right now," said Stahelski to Movies.com. "We have ideas for days and without blinking twice we know we can outdo the action from the original. It's the matter of story and how much you like the character."

Given the amount of work that went into John Wick's universe and background, the crafting of a sequel is a no-brainer, especially with the modest financial success of the film. A $20 million budget yielded a box office return of about $78.7 million,although there's no official word on how much marketing cash was spent. And with the Blu-ray hitting earlier this week, the total revenue generated by the original project will grow significantly.

Are you digging a John Wick sequel? Or was one round with Keanu and company enough? Let us know in the comments.