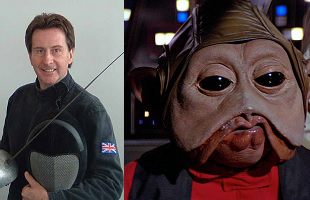 Bonehill was a key Star Wars player on-screen, and a master swordsman off.

Actor Richard Bonehill has died at the age of 67, and he leaves behind an incredible career that weaves through both Hollywood and the Olympic games.

Bonehill was never a household name actor, but his appearances in the Star Wars universe cannot be ignored. Along with playing unnamed stormtroopers and rebel soldiers in both The Empire Strikes Back and Return of the Jedi, Bonehill played a number of alien characters in the Star Wars universe, including some of the Mon Calamari in the latter. But most important, by far, was Bonehill's role as Nien Nunb, who served as Lando Calrissian's Millennium Falcon co-pilot in Return of the Jedi. Nunb is one of the most recognizable characters in the universe -- so recognizable, in fact, that his appearance in The Venture Bros. is an undeniably great cameo.

Other on-screen credits include Doctor Who, Top Secret!, and Rob Roy.

Bonehill made several appearances on-screen, but was a Hollywood regular off-camera as well. As a master swordsman, Bonehill served in such a capacity on several high-profile productions, including Highlander, The Avengers, and The Man in the Iron Mask.

When not involved in that galaxy far, far, away, Bonehill was the President of Truro Fencing Club in Cornwall, a role he held until his death. He also served as the head coach at the club from 1995-2007, and trained three fencers at the club who competed in the London 2012 Olympic games.