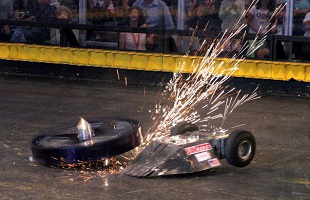 ABC ordered a six episode run for this Summer, with MGM distributing internationally.

Time to put our fear of the robot apocalypse on hold. BattleBots, the R/C robot-fighting battle royale that once graced the small screen over on Comedy Central, is making a comeback later this year.

According to Deadline, ABC has ordered six episodes of the reboot, all of which will air this coming Summer. Ed Roski and Greg Munson, who produced the show in its first form, are behind the project, as is former ABC exec Lloyd Braun.

The show appears to follow the same basic formula as its Comedy Central predecessor. Along with focusing on a tournament-style robot battle format, the show will dedicate a considerable chunk of time to the teams behind the robots, the design process, and the technical expertise of those participating.

Given the technological leaps that have occurred between 2015 and the last episode in 2002, some of these 340-pound beast mechs should be an awe-inspiring sight. Boy, I hope they allow laser weapons!