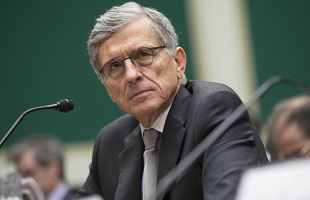 While FCC chairman Tom Wheeler leads the way, some of his commissioners bristle at Title II reclassification.

While Tom Wheeler and the FCC are primed to move forward with a Title II reclassifcation-based net neutrality plan later this month, at least one FCC commissioner is not happy with the roadmap.

FCC commissioner Ajit Pai released a statement today, flatly stating that the 332-page-long net neutrality plan to regulate the Internet "gives the FCC the power to micromanage virtually every aspect of how the Internet works." Pai, who calls the document "President Obama's 332-page plan," -- suggesting that the plan originally came from the White House, and not chairman Wheeler -- goes on to explain that such heavy regulation would stifle choice and innovation, and could lead to heavier taxes on broadband service. T-Mobile's Music Freedom service, which allows customer to stream music without taking a hit to their cellular data plan usage, might not be possible with Title II-controlled broadband Internet, according to Pai, specifically because it exists as a sort of paid prioritization/"fast lane" access plan.

"Instead of allowing the American people to choose the broadband service plan that is best for them, the President's plan places that decision in the hands of a Washington bureaucracy," said Pai.

Pai is one of two conservatives who sit on the FCC board, and it's unlikely that his feelings on Title II reclassification will derail chairman Wheeler's net neutrality plans. Furthermore, other FCC employees have come out and taken issue with Pai's statement on the policy changes. FCC council Gigi Sohn said that new taxes could arise from reclassification, but the "billions of dollars" figure being touted by some is greatly exaggerated. Sohn also said that most of the 332-page document is dedicated to the history of net neutrality, and answers questions and comments brought about by the open comment period on the FCC website -- which is why Wheeler's distillation of the plan is a trim four pages.

Like any major policy shift or new law, pros and cons are sure to arise. The FCC's decision later this month will attempt to determine whether or not those cons are worth the change.