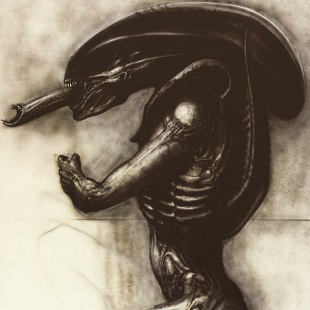 Ridley Scott will produce the film through Scott Free, but it is not a replacement for Prometheus 2.

Update: Neill Blomkamp's gradual shift from "working on an Alien project for fun," to "I might direct an Alien movie," has been upgraded to "Yes, I am definitely making an Alien movie now."

A few hours ago, Blomkamp posted a new Alien image to his Instagram account, with the quote, "Um... So I think it's officially my next film. #alien." (The image is embedded above as well.)

Variety is confirming the news, saying that Blomkamp has inked a deal with 20th Century Fox. While there's no official title yet, this is not going to be Prometheus 2, although Ridley Scott is producing both films through his Scott Free production company. Blomkamp's Alien film will take place "years," after Prometheus 2, but it's not yet official where in the universe's timeline the film will take place.

Other details are scarce at the moment, like if Sigourney Weaver is attached to the project. But as Hollywood usually goes, we should find out soon enough (by San Diego Comic-Con, at the latest).

Quite the turn of events! and it only took about six weeks.

Original Story: Just over a month ago, we posted a slew of concept art from an Alien sequel project that director Neill Blomkamp had been secretly working on for months. After saying that he wouldn't be investing anymore time in the project going forward, it appears as though Blomkamp's Alien is closer to happening than we originally thought.

During an interview with Uproxx, Blomkamp was asked about the concept art. "...when Chappie got heavily into post-production, I could take my foot off the gas a bit," said Blomkamp. "I was thinking about what I wanted to do next and I've been wanting to make an Alien film for like years and years."

Blomkamp then said that 21st Century Fox would make the film "tomorrow," if he asked them to, but Neill would have to "...mentally agree with that." After his experience working on the scrapped Halo film years ago, Blomkamp has avoided plunging into any sort of established IP or franchise. But judging from the concept art, and Fox's willingness to let Blomkamp run the show, perhaps he's finally ready to embrace an existing universe.

Alien 5, as it was being called online, could be a sequel to James Cameron's Aliens, playing some timeline tom foolery by essentially forgetting that David Fincher's Alien 3 ever happened. Check out the concept art gallery here.