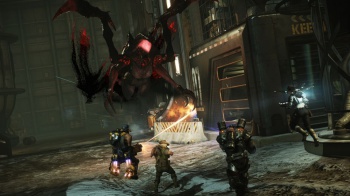 It'll set you back an additional $100 to get all of the launch-day Evolve content.

Editor's Note: We initially incorrectly reported that it would cost players $136 to purchase all of Evolve's DLC. While it is correct that there is $136 worth of content available to purchase on the game's marketplace, this includes several larger bundles that contain multiple skins. With the bundles removed, the amount of content available on the store totals $75.

At this point, Evolve's DLC policy is a pretty well-known point of contention in the gaming world. But just how much DLC is there available for the game, which just launched this week? At launch, Evolve currently has $100 worth of additional content for purchase - more than twice the value of the "full" retail game.

Breaking it down further, there are 44 pieces of $2-$7 Evolve add-on content listed on the game's Xbox Marketplace product page, totaling $75. To be fair, these are all cosmetic enhancements for hunters, monsters and weapons, such the Kraken Wendigo Skin ($3), the Assault Ragnarok Skin Pack ($5), and the Goliath Bog Skin ($3).

On top of this, there is the $25 season pass which will eventually unlock four new Hunters. There's also technically the "PC Monster Race" special edition which costs an additional $40 over the game's base $60 price tag, and includes the content from the season pass a fifth monster, two new hunters and four additional skins.

Turtle Rock certainly wasn't kidding when it said the game will have lots of DLC.