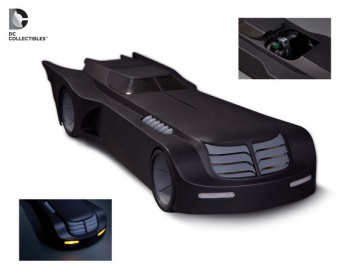 Thanks to TV shows like The Flash and Arrow, we're getting more and more DC Comics fans these days. But whether you watch each series or enjoy the original comics, we can all probably agree on one thing - the official DC action figures are super slick. (No pun intended.) And, if the recently released line-up is anything to go on, there's several solid DC Collectibles to look forward to in 2015.

"2015 is going to be another groundbreaking year for DC Collectibles," said chief creative officer of DC Entertainment Geoff Johns. "#DCTV has exploded and so we're following suit with figures and props."

DC's toy and collector item line-up is being showcased at the North American International Toy Fair, with a strong focus on television line-ups. Action figures for Arrow and The Flash will be available, along with collectibles inspired by Batman: The Animated Series. On the comic book front, DC Comics will also introduce its "Icons" line, which presents the most recognizable versions of characters from the company's long history.

My personal favorite however, has to be the scaled Batmobile from Batman: The Animated Series. It's not just to scale, and looks fantastic - it has sliding doors that let you fit any two 6" action figures from this line. As I kid, I would've absolutely loved playing with a toy like this, and am still incredibly tempted as an adult.

And that's not even the full-line up. Want a Krypto or Dex-Starr plush figure? How about that Doctor Fate helmet from Constantine? Or perhaps a Reverse Flash ring that you could hide in plain sight? Whatever your interest, the full line-up will probably leave you feeling like a kid in a toy store once again.

TV Series Action Figures from The Flash and Arrow: