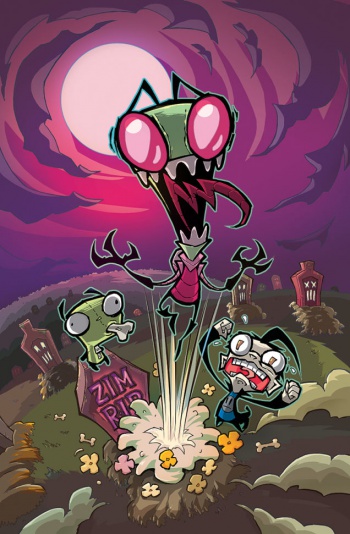 Invader Zim will be resurrected as an Oni Press comic book under the collaboration of Nickelodeon and creator Jhonen Vasquez.

Update: Prepare your bladder for imminent release: Oni Press has confirmed production of an official Invader Zim comic book. Issue 1 will arrive this July and is being created through a collaboration between Nickelodeon and creator Jhonen Vasquez.

"I'm always confused when people say how much they miss Invader Zim because the show never stopped running in my head, and then I remember everyone else isn't in my head," Vasquez said in a press statement. "I try to imagine the world for all those people who don't know what Zim's been up to since the show went off the air and it makes me shudder. How can people live that way? Hopefully this comic helps make the world a better place."

The exact creative team hasn't been confirmed, but series veterans Aaron Alexovich, Eric Trueheart, and Rikki Simons are all named in the press release. Invader Zim will reach bookshelves on July 1st.

Original Story: The phrase "Doom is coming" might not seem like much at first. But if you spotted the stylized text in Oni Press' Twitter feed and got very excited, it's easy to guess why: It teases the long-awaited return of Invader Zim. Originally airing on Nickelodeon from 2001 to 2002, Invader Zim was an award-winning animated series cancelled just prior to producing its finale. It remains a fondly remembered cult classic, but now it might be making a comic book comeback - a theory helped in no small part by creator Jhonen Vasquez reposting the image.

Invader Zim follows an alien attacker and his adorably malfunctioning robot, GIR, as they infiltrate and conquer Earth to impress their homeworld's overlords. Unfortunately, his plans are often dashed by Dib, an elementary school student and paranormal investigator who is able to see through the disguise. Invader Zim earned an Emmy and two animation awards, among other nominations, before being cancelled in 2002 due to high production costs. The series was originally meant to culminate in a full-length TV movie called "Invader Dib".

Long after its cancellation, Invader Zim remains a highly-quotable cult classic thanks to DVD and digital storefront re-releases. Many attempts have been made to resurrect the series, but now it seems Invader Zim will take the Firefly route of continuing in comic book form. Oni Press has said to "stay tuned for more" this Friday, when hopefully details will be unveiled.

You can sing the doom song now.