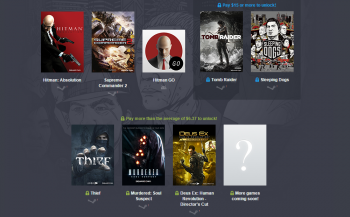 Just $15 will get you some of the very best titles from Square Enix's extensive catalog.

Everyone loves a good Humble Bundle, especially Square Enix, who have actually already done one in the past. Now, they're back, with the Square Enix Humble Bundle 2 - featuring some of the best games from the publishers catalog in the usual pay-what-you-want for charity format.

For as little as a buck, you can get Hitman: Absolution, Supreme Commander 2 and the Android title Hitman: GO. Beat the average ($6.37 at time of writing) and you'll also get Thief, Deus Ex: Human Revolution and Murdered: Soul Suspect. Additionally, if you are a big spender and drop at least $15 on the bundle, you'll get probably the most well-received Square Enix titles of the last few years: Tomb Raider and Sleeping Dogs.

The games have a combined value of $165, and purchasing the bundle will give you keys redeemable on Steam, as per the recent changes to Humble Bundle's authentication system. All versions of these games are completely DRM-free, including the Android version of Hitman: GO.

This time, the charities being supported by the bundle are the Make-a-Wish foundation and Gamesaid.

The bundle page promises that more titles will be added to the bundle soon, so stay tuned!