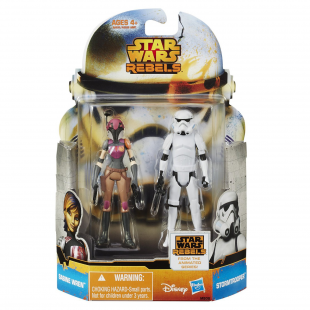 Responding to accusations that it hasn't released enough female Star Wars: Rebels toys, Hasbro has said that it's put out "plenty."

Update: Hasbro, responding to criticisms about its response to the concerns about its Star Wars: Rebels toy line, has offered a new revised statement answer to the interviewer's original question.

"Hasbro actually has some great new characters from Rebels hitting shelves now such as Sabine and Hera," said the company. "[It's also] recently been releasing more females within our Black Series and Saga Legends line such as Mara Jade, Toryn Farr, Bastila Shan, Luminara Unduli, Padma [sic] Amidala (Geonosis), and a number of great Leia's such as [Episode IV], Endor, and the awesome Boushh disguise that was revealed at NYCC."

While this statement does a much better job of highlighting the company's overall progress toward more diversified Star Wars action figures, it must be noted that it doesn't really address the issue of whether or not it will be releasing more female Rebels toys to help counterbalance the overwhelming focus on male characters like Ezra and Kanaan.

Original Story: If there's one thing that Star Wars is good for, it's merchandising. Since its earliest days, the franchise has been nothing if not a factory for churning out Star Wars-stamped toys, t-shirts, lunch boxes and more. Recent years, however, have demonstrated that there are apparent limits to the sorts of merchandise companies will produce. If you're a female Star Wars character, for instance, you might find that toy makers are less interested in selling you as an action figure.

That, at least, is the takeaway we got from recent a recent statement from Hasbro indicating that its Star Wars: Rebels toy line includes "plenty" of female representation. The comment came following a question from one attendee inquiring as to whether or not the company had any plans to expand its Rebels offerings to include more Hera and Sabine action figures. "Where are the action figures for the female characters from Rebels, like Hera, Sabine, or Maketh Tua," asked the questioner. "Male characters like Ezra and Kanan have been released multiple times already in many formats and scales, yet the best we've seen on shelves so far is a single Sabine with a non-removable helmet and a yet-to-be-released Hera, both of whom are packed with re-released Stormtroopers." Hasbro's response was to simply say that the company "feels [it has] released plenty of female characters in the line."

While not specifically saying it won't invest in more female action figures in the future, that definitely sounds like a dismissal from where we're sitting. This is unfortunate for a variety of reasons, the least of which not being that it's not the first time we've seen this kind of thing happen with Star Wars toys. Just last year, Disney fell under scrutiny after customers realized that the company's online store included no Princess Leia action figures. Facing mounting pressure from fans, the company eventually agreed to add Leia toys to its online catalog.

What strikes me personally is just how short-sighted this and most gender-based toy exclusions feel. Setting aside the fact that I'd happily buy female targeted Star Wars toys for my daughter, I can say that I would have been perfectly happy to receive a female action figure when I was a kid so long as it hailed from a property that I already enjoyed. Back when I was playing with Ninja Turtles, for instance, I wanted an April O'Neil to play with simply because she was a part of the show. Granted, that's just me, but I sometimes wonder if toy companies overestimate how much young boys scoff at the idea of playing with a non-boy toy. At least in the current case there are already some female toys available. Even so, here's hoping Hasbro decides to expand past "plenty" at some point in the future.