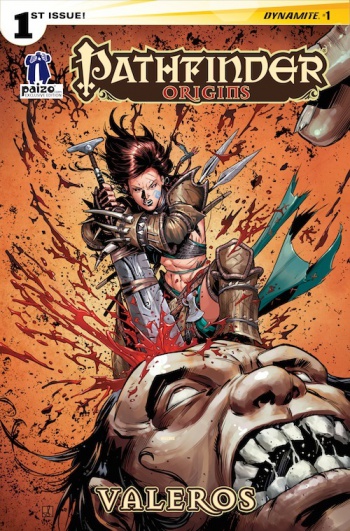 Enjoy Pathfinder and its fantasy heroes? Dynamite just launched a new comic series about their exploits, written by Paizo's staff.

For many, Pathfinder is a hugely-popular tabletop game that even rivaled the mighty Dungeons & Dragons. But its publisher, Paizo, hopes fans will enjoy Pathfinder in another medium: Comic books. Launching this week, Pathfinder: Origins is a new Dynamite comic series detailing the exploits of heroes from the official campaign setting - all written by Paizo staff and contributors.

Pathfinder: Origins opens in the world of Golarion, where members of the globe-spanning Pathfinder Society travel the world seeking adventure. A band of heroes arrive at a Pathfinder lodge seeking maps to complete their quest, but since the Venture-Captain doesn't recognize them she's reluctant to do so. To prove their mettle, each member of the band recounts a tale from their past where they achieved victory against all odds. Issue #1 - written by Paizo Publisher Erik Mona with art from Tom Garcia - focuses on Valeros, a human fighter and infamous drunk tasked with protecting a caravan headed to Bloodsworn Vale.

Future issues will focus on characters like Seoni the sorcerer, Merisiel the rogue, and Kyra the cleric. Each standalone issue also sees its narrator meet a Pathfinder character who hasn't yet appeared in the licensed comic books. The first issue introduces the female barbarian Amiri, while later books present figures like Seelah the paladin, Lini the druid, Sajan the monk.

And if you've never played Pathfinder, and have no idea who these characters are? It should still prove an entertaining read, if you enjoy swordplay, magic, monstrous creatures, and a dash of typical tabletop humor. The first three pages are included below as a preview, but I suspect anyone who enjoys fantasy games - or the comics they inspired - will enjoy Pathfinder: Origins.