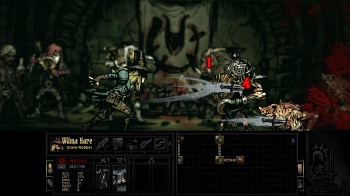 Illegitimate sales of Red Hook Studios' Darkest Dungeon are occurring on the official Windows Store - and it's probably nothing but malware.

Update: The Windows Store Darkest Dungeon page - and in fact everything posted by Balaji Chowdary - has been taken offline.

"We have had several kind Microsoft employees from various departments reach out and offer to shepherd/escalate the issue to the store team," Red Hook Studios co-president Tyler Sigman told Polygon earlier today. "It's been really great of them to do so ... We only noticed and filed our support ticket yesterday, which was a Sunday. So it really has not been very long yet.

"The whole scamming/cloning/pirating side of the business obviously sucks for devs," Sigman continued. "Our focus is on controlling the things we can: working with storefronts (or via other remedies) to ensure that our legal rights are not violated, and making the best game we can and putting it out at a fair price so that people thing it's a worthwhile purchase. This particular issue (DD on the Windows Game Store) is comparatively very, very tiny right now, but we don't like the idea of gamers getting scammed, aside from the other undesirable effects like providing support for pirated/altered versions and losing revenue to people who had nothing to do with creating the game."

Original Story: Darkest Dungeon is the bleak-yet-fun game of dungeon crawling and mental breakdowns that's quickly becoming one of the best titles in Early Access. But be warned if you're looking for discounted copies - Darkest Dungeon scams are rampant, even on official sites like the Windows Store. A Darkest Dungeon app for Windows 8 currently sits on the actual Microsoft storefront - which would be great if Red Hook Studios actually authorized it. (Don't buy the app, by the way - the odds are very high that it's malware.)

"Please ensure you purchase the game from Steam or Humble," Red Hook wrote on the Darkest Dungeon twitter as reports arrived. "Scams have been reported and we are checking into them."

Actually examining the Windows Store's "Darkest Dungeon" page (assuming it's still up when you read this) reveals all kinds of glaring red flags. The game description is poorly formatted, and mentions heroes traveling through "twisted forests, crypts and other strangling places". The app itself is 2 MB in size, which is odd considering the full game is roughly 1 GB. The listed Darkest Dungeon support email goes to [email protected] - far from an official address.

But perhaps the biggest indicator this app isn't on the level? Its lone screenshot has an "Activate Windows" watermark that suggests it was taken with a Windows 8 trial copy.

The Windows Store game entry still exists as of writing, but the internet rapidly took screenshots and dissected the matter in short order. What's worse is that the "publisher" - Balaji Chowdary - is running this operation on 20 games, including Shadowrun: Dragonfall, Warcraft III, Euro Truck Simulator 2, and Game Dev Tycoon.

We will update this story with any additional information as it develops.

Disclaimer: This writer is a backer of the Darkest Dungeon Kickstarter campaign. 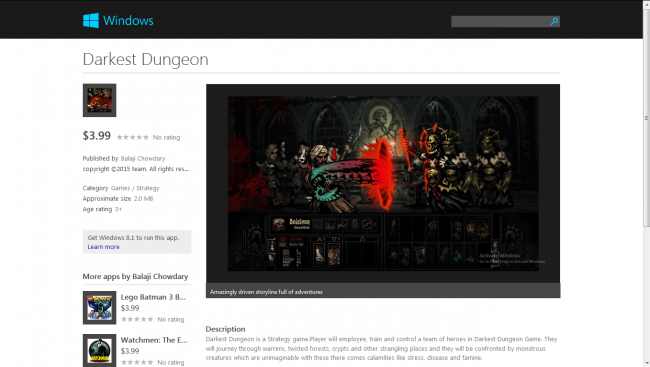