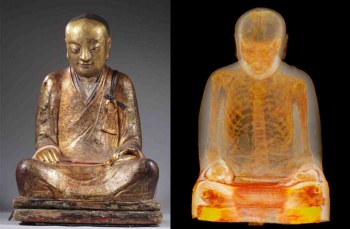 The mummified remains of a Buddhist monk sit within a Gautama Buddha statue - and researchers think the process was completely voluntary.

One of the most recognizable religious images in the world is that of Buddha (not to be confused with Budai), who has statues representing him in an enlightened state. But researchers at the Drents Museum in the Netherlands are studying a far more unusual example - a statue that contains the 1000 year-old mummified corpse of a Buddhist monk. The body was sitting inside in an identical lotus position, prompting the museum to believe the monk was self-mummified in an attempt to achieve enlightenment.

"On the outside, it looks like a large statue of Buddha," the museum said in a press release. "Scan research has shown that on the inside, it is the mummy of a Buddhist monk who lived around the year 1100."

The statue itself, now being shown for the first time outside of China, revealed its body when researchers were conducting non-invasive CT scans. The remains are believed to belong to Liu Quan, a Buddhist master and member of the Chinese Meditation School. The practice of self-mummification wasn't unheard of at the time, especially in Japan. We'll describe the process in the next two paragraphs, but be warned - it's super gross.

So let's say you've decided to try out self-mummification - you've got a long journey ahead of you. First, you follow a strict 1000 day diet of nuts and seeds to purge the fat from your body. Then you level up to another 1000 day diet of bark and roots. By this point, you'll be ludicrously thin, but we're not finished yet: Next you drink a poisonous tea made from Japanese varnish tree sap. This induces vomiting, a rapid loss of bodily fluids, and might even make your body too poisonous for insects to eat.

If you've survived this long, you'll be placed in a statue with an air tube and bell. The bell would be rung every day to inform other monks you were still a "living Buddha". Once you stopped ringing the bell, the monks assumed you were dead, removed the air tube, and sealed your tomb. In Liu Quan's case however, it seems his internal organs were removed and replaced with scripts of Chinese writing - although it's not entirely clear at what point in the timeline this happened.

If you're fascinated enough by the story to see the statue, it will be displayed at the National Museum of Natural History in Budapest until May. If you can't wait to look at mummies, we've included a gallery from Discovery.

Warning: We put these in spoiler tags on the off chance it makes you lose your lunch after that description.