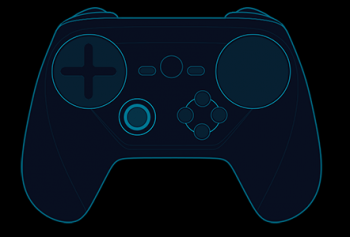 Valve has just sent out a press release stating that it will be showing a family of new Steam devices at next week's Game Developers Conference (GDC) in San Francisco, CA. While this by itself is nothing to be excited about - Valve has been hyping its Steam Machines for quite some time now - the release specifically stated that the final version of the Steam Controller, as well as a new VR initiative dubbed "Steam VR" would be on display.

The Steam Controller's multiple delays and redesigns are essentially the reason why Valve's Steam Machines haven't been released yet. Some Steam Machine partners, such as Alienware, released Windows-based models in frustration, but we haven't seen a "true" Steam Machine as of yet. The fact that Valve is now ready to show it's "final" version of the controller means that mass Steam Machine release is imminent.

While Valve gave us literally no other info on its other big announcement, the Steam VR initiative, it certainly sounds a lot like Valve's in-house answer to the Oculus Rift. Considering how well all of Valve's other initiatives have integrated with its Steam platform - where the overwhelming majority of PC games are played - we can probably assume Steam VR will have some pretty great compatibility, and may even muscle out its competitors.

"GDC 2015 will mark the 13th anniversary of Valve's first public announcement of Steam, which has since become the leading platform for PC, Mac, and Linux games and software," said Valve.

I'm excited to see the Steam Machines finally reach completion. As for Steam VR, well, we may be approaching the Gabe Newell PC gaming singularity...