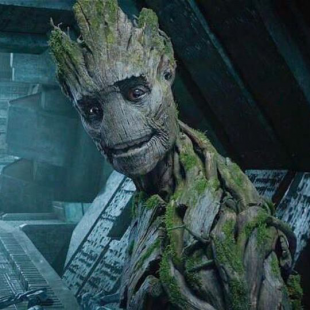 Guardians of the Galaxy director James Gunn recently revealed that Groot's crotch area was the hardest part of the character to finalize.

While the onscreen actors in Guardians of the Galaxy were, by-and-large, wonderful, it was the CGI duo of Rocket and Groot that easily stole the show. Vin Diesel's Groot was an especial treat, winning audiences over with a sizable collection of moments that delivered big laughs and, on occasion, even warmed the heart. As excellently realized as his character was, one can imagine that it took a lot of work on the part of the film's creators to bring him to the screen as well as they did. According to director James Gunn, one part of the character in particular wound up being a point of challenge for its creative team.

The source of their consternation? Groot's crotch.

Discussing the character in a Facebook post, Gunn revealed that finding a good design for Groot's nether-regions was "incredibly difficult" and something that the he and the movie's artists spent an almost ridiculous amount of time working on. "A piece of bark looked too cheesy and fig leaf-like or a root was in just the wrong place that [it] looked like an ingrown penis," he said, describing some of the options they explored. "There were more iterations of Groot's crotch than any part of his body." It's a wonder they didn't just stick a shirt on him and call it a day, Donald Duck style.

The final version of Groot, of course, was vastly different overall from earlier concepts which envisioned everyone's favorite talking tree as a creature that looked much bulkier and, in Gunn's own words, "old." Considering how well audiences responded to character however, we feel safe in saying that it was well worth the effort.