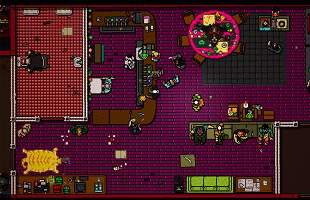 ...and a free cross-promotion with Payday 2 is coming with it.

After delaying Hotline Miami 2 last October, Devolver Digital and Dennaton Games have finally come out with a proper release date for the top-down 80s nightmare-turned-action-flick-amalgamation.

Dennaton's latest hits PC, Mac, Linux, PS3, Vita, and PS4 on March 10th. The usual players will have the title on tap, including -- Steam, GOG -- and some sort of Humble appearance is in the works (we're not sure if it's a standalone release there, or if Hotline Miami 2 will appear in a bundle). $15 is the asking price, but those who pre-order will see the cost knocked down 10% to $13.49.

Along with the vanilla release, there's the Digital Special Edition ($19.99, or $17.99 pre-ordered), which includes a six-track EP of remixed game tracks. M|O|O|N, Scattle and Carpenter Brut are among the included artists.

And for those Payday 2 players who purchase Hotline Miami 2, there's a free DLC pack coming your way. Overkill will be releasing a Hotline Miami 2-inspired jacket and mask pack, content addition, complete with the character Jacket, and a handful of Hotline Miami 2: Wrong Number masks. Jacket is reserved for those who purchase the Digital Special Edition, while the masks will be available to all comers (who own both games). Jacket also comes with his own gun, melee weapon, and perk deck.

This isn't the first time Overkill and Dennaton/Devolver have teamed up; September saw the release of a $6.99 DLC pack containing weapons, masks, and a heist.