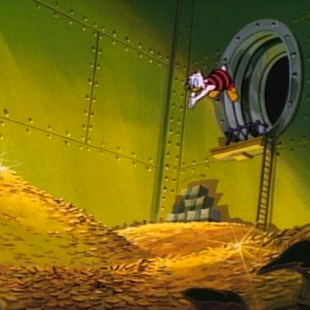 Disney has ordered a new Ducktales TV series it intends to launch on its Disney XD channel in 2017.

While Disney in the early 1990s created an entire lineup of afternoon cartoons, one of the earliest and most memorable was Ducktales. Following the treasure hunting escapades of Scrooge McDuck and his nephews Huey, Dewey and Louie, it transported audiences to exotic locales where its cast invariably wound up embroiled in exciting adventures. Spawning a classic video game and probably the catchiest theme song to ever grace a cartoon, its remembered by many as one of the best animated series that Disney ever produced. Now,an entirely new generation of viewers will be given the chance to experience the series and its charms.

Or, in the least, they'll get to experience a reboot. The new series, set to start in 2017, was announced by Disney today for its satellite television channel Disney XD. The show, like the original, will focus on Scrooge McDuck and the shenanigans that he and his nephews get into. Unlike the old series however, Donald Duck will be joining in as a regular cast member. Fans can also expect the return of characters like Duckworth, Launchpad, Gyro Gearloose, Flintheart Glomgold, Magica DeSpell, the Beagle Boys, Mrs. Beakley and (sigh) Webbigail.

According to Marc Buhaj, senior vice president of programming at Disney XD, the new series will strive to emulate the "spirit" of the original. "DuckTales' has a special place in Disney's TV animation history, it drew its inspiration from Disney Legend Carl Barks' comic books and through its storytelling and artistic showmanship, set an enduring standard for animated entertainment that connects with both kids and adults," he said. "Our new series will bring that same energy and adventurous spirit to a new generation."

While I'd suggest that the original Duck Tales still holds up well enough that we don't need a new one (just play some reruns!), I'm not entirely opposed to Disney investing in a new series. In fact, I'd actually love to see the company revisit more of its 1990s cartoon shows. Tailspin, Darkwing Duck, freaking Gargoyles; it produced some solid shows during that decade that we sadly haven't seen much of in the years since. Did you watch Ducktales back when it first aired? If so, what do you think of this reboot announcement? Are you excited or do you think it'll be a duck-fail?