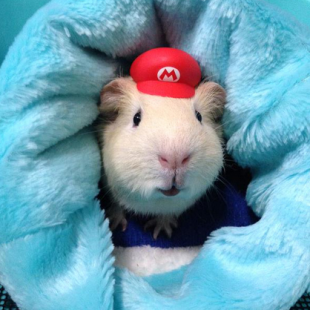 Twitter user Chikuwa Kintoki has released a series of pictures transforming her guinea pigs into characters from anime, video games and film.

The internet is nothing if not an endless treasure trove of imagery. And while some will make you question the worthiness of the human race, there's no lack for pictures that will just straight-up put a smile on your face. Standing tall on the grand pile of grin-inducing pictures are the ones with guinea pigs. Guinea pigs might not be the brightest animals in the proverbial box, but if there's one thing they excel at it's being effortlessly cute. Most cavies can just go about their regular business and somehow still be heart-meltingly adorable. And when you add in costumes? The cute factor gets dialed up to almost unimaginable extremes.

If you don't believe us, you might consider taking a glance at the Twitter feed of Chikuwa Kintoki. In recent weeks, Kintoki has posted a collection of pictures chronicling her noble efforts to dress her guinea pigs in outfits based on various video games, anime and movies. Among the works she's paid piggy tribute to are Super Mario, Street Fighter, Friday the 13th, Sailor Moon, One Piece and JoJo's Bizarre Adventure.

This, of course, isn't the first time we've seen guineas made to get their cosplay on. Back in February 2014, artist and piggy aficionado Timothy Lin put out a similar gallery of pictures showcasing his pets engaging in a bit of Star Wars re-enactment. While I'll admit that I might prefer those a bit more than Kintoki's work, I'd still give her some bonus points for variety and the use of some costumes that are clearly custom-made. Take a look and let us know if this made your day as much as it made ours.