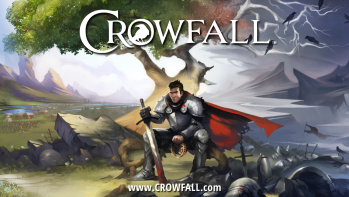 Player characters are immortal in ArtCraft Entertainment's Crowfall MMO - but the worlds they fight on will inevitably come to an end.

Gordon Walton and J Todd Coleman know their MMOs. Between them, they've produced games like Ultima Online, Star Wars Galaxies, Shadowbane, Wizard101, and Star Wars: The Old Republic. But they also think MMOs can aim much higher. For that reason, Walton and Coleman founded ArtCraft Entertainment and approached Kickstarter with their first major project: Crowfall, an MMORPG that combines themes from Game of Thrones and EVE Online. It's hard to imagine a new MMO standing out with so many on the market, but its unique concept combining parallel worlds, tabletop RPG conventions, and strategy gameplay - along with some slick alpha footage - suggests Crowfall might just leave its mark.

Crowfall's aim is deceptively simple - allow for persistent characters while the game world approaches its inevitable end. Each player controls an immortal champion empowered by the gods to fight across dying worlds. Players choose a campaign world that will only exist for a limited time, passing through seasons that alter the environment, resource availability, and the strength of undead NPC legions. The campaign world ends if a win condition is met or if the winter season concludes. At that point, the server is reset and players can journey to another campaign world with their spoils.

From all appearances, these campaign worlds aren't just identical settings copy-pasted into each server. Every campaign world is unique, containing procedurally generated land masses and new gameplay rules as well. Not all races will appear in each campaign, death and respawn rules vary, and even magic effects change from one world to the next. On top of that, the entire campaign world is rendered with voxels, which lets players build structures like castles... or tactically destroy the environment to achieve victory.

Crowfall still has a lot of work ahead of it, with a proposed release date in Dec 2016. But the alpha footage certainly suggests its well-underway, especially on the destructive physics front. But with almost 70% of its $800,000 goal raised and 28 days left to go? The odds are pretty high that we'll hear more about Crowfall in the coming months.