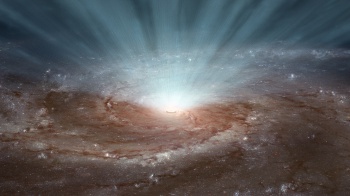 Scientists from NASA and the ESA have confirmed that black holes emit X-Ray winds in all directions, which has a significant effect on how young galaxies develop.

Black holes are pretty strange in that everybody knows they exist, but we understand so little about them. For example, while scientists know black holes consume matter, it's also suspected they emit X-Ray "winds" in all directions that influence how surrounding stars grow. But it wasn't until recently - when telescopes spotted a supermassive black hole two million light years away - that we could prove the essential role they have in galaxy formation.

"We know black holes in the centers of galaxies can feed on matter, and this process can produce winds. This is thought to regulate the growth of the galaxies," Fiona Harrison of Caltech explained. "Knowing the speed, shape and size of the winds, we can now figure out how powerful they are."

The discovery was made when NASA's Nuclear Spectroscopic Telescope Array (or NuSTAR) and the ESA's XMM-Newton telescope trained their focus on quasar galaxy PDS-456. Like many galaxies, PDS-456 has a supermassive black hole at its center, but as a young galaxy we have a much clearer visual on the effect of its winds: As the black hole chows down on matter, it releases insanely powerful X-Ray winds that push gases out of the galaxy, preventing young stars from using the gases as fuel.

Scientists were aware of X-Ray winds from previous observations, but could only see winds that were blowing towards Earth. By working together the two telescopes were finally able to confirm that X-Ray winds travel in all directions from the black hole, in an almost spherical fashion. "The complementarity of these two X-ray observatories is enabling us to unveil previously hidden details about the powerful side of the universe," XMN-Newton project scientist Norbert Schartel said.

Thanks to its distance, PDS-456 also gives us a clearer picture of what the universe looked like 10 billion years ago when supermassive black holes were more common. The report suggests these winds played a hugely significant role in how galaxies form - these winds carry more energy per second than is emitted by over a trillion suns.

"For an astronomer, studying PDS 456 is like a paleontologist being given a living dinosaur to study," NASA's Daniel Stern said. "We are able to investigate the physics of these important systems with a level of detail not possible for those found at more typical distances, during the 'Age of Quasars'."