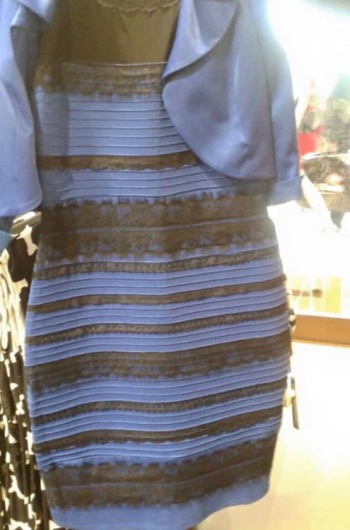 Why does this dress look white one moment, and blue the next? Your friends aren't crazy - there's some legitimately cool visual science happening behind the scenes.

We like to think our eyes can be trusted above all else, even when science shows they are confused by simple visual tricks. But if you were spending time on social media last night, you know that "the dress" sowed confusion and madness on a scale even the most rational individuals couldn't process. In case you missed the chaos (you lucky soul), it all started with a picture of a blue and black dress... Or was it white and gold? That's the problem: The exact same picture shows different colors depending on the viewer - even if two people are looking at the exact same screen.

First of all, you're not losing your mind and your friends aren't trying to trick you - it really is possible to see two different colors here. Second, the dress is actually blue and black, no matter how insistently your eyes say otherwise.

So what's happening? Well, it's an incredibly specific flaw in the way our eyes interpret color. We see color when light hits the retina, setting off neural connections in the visual cortex before interpreting it as an image. The problem is that your brain doesn't actually want to see everything - it only wants to see light reflecting off objects, not the illuminating light that surround us at all times. To get around the problem, the brain filters the color of illuminating light hitting your retina so you only see the color of objects. This is why everything around you doesn't look like an insane white mess after you switch on a lightbulb.

But this picture - or more specifically, the background illumination - breaks the context for how our brain processes these colors. "What's happening here is your visual system is looking at this thing, and you're trying to discount the chromatic bias of the daylight axis," Wellesley College neuroscientist Bevil Conway told Wired. "So people either discount the blue side, in which case they end up seeing white and gold, or discount the gold side, in which case they end up with blue and black."

If you were to photoshop the picture to have a dark background - or printed it off and cut out a sample - you'd have a better context for what the actual dress looks like. But as it stands, our visual perceptions vary greatly based on our personal context - to the point that the dress might change color as we look at it. Conway even suggested people who see white prefer the daylight illumination context, while blue favors nighttime light. "I bet night owls are more likely to see it as blue-black," he continued.

It's still an incredibly unique case - one that will probably become more common now that we've discovered the trick. But in the meantime, we can remember Feb 26 2015 as the day the internet completely lost its mind over a dress. Don't forget to tell your grandchildren where you were during this historic event.

I mean, it's not like anything important was happening.

Editor's Note: An earlier version of this story said the dress was blue and gold, which was a misreading of one of the quotes from our source. The dress is actually blue and black and the story has been updated. We blame the llamas.