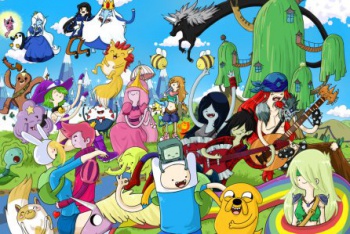 Chris McKay, of The Lego Movie is set to direct the full-feature Adventure Time movie.

Pendleton Ward's Adventure Time has proven itself to be immensely popular with both kids and adults during its time on Cartoon Network. Now, it looks like it's ready to make the jump to the big screen. Deadline has learned that the upcoming project is being headed Chris McKay and Roy Lee.

McKay cut his chops on The Lego Movie, where he was an executive producer. He is currently directing The Lego Batman Movie. Ward himself will have some involvement in writing and producing the feature version of his cartoon, though we are not quite sure just how much extensive that involvement will be.

At this point this is pretty much all the information we know. We're not sure if this will be an adaptation of what has already happened in the series, or if it will be an entirely stand-alone story.

Adventure Time started back in 2010, and has had a pretty long and successful run so far. It's spawned plenty of other spin-offs and merch, including a few video games of... questionable quality. Ward's ability to build such a rich and detailed world despite having only 10-minute episodes is particularly impressive.

What do you guys think of an Adventure Time movie? At this point, I'm cautiously optimistic.