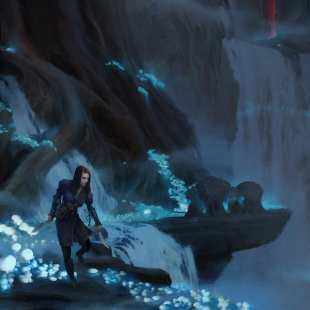 Underworld Ascendant's Improvisation Engine will give players the freedom to come up with gameplay solutions "designers may have never imagined."

Last week the creators of Underworld Ascendant enjoyed a sweet bite of success after it reached its Kickstarter goal of $600,000. In the days since, contributors have continued to give to the game, helping it climb to even higher rungs of its funding ladder. And while some of the project's accomplishments can definitely be traced back to it being a spiritual successor to the classic Ultima Underworld games, we're willing to bet that more than a few contributors were won over by some of the promises being made by its developers at OtherSide Entertainment.

Key among those is the Inspiration Engine, a new piece of software aimed at giving players an unprecedented range of options for how they handle in-game challenges. Players'reaction to events will, in turn, come packaged with long term consequences that can shift and change the entire course of the game. If that strikes you as something that'd be complicated to make, you wouldn't be wrong. Speaking to The Escapist about the Inspiration Engine, OtherSide founder Paul Neuarth confirmed that it has been and continues to be a "challenge."

"It is tricky to code, and a design challenge, for sure. We¹ve done less advanced technologies with Thief and other games in the past, but the Improvisation Engine is pushing the envelope," he said. Explaining the team's method of tackling the engine, Neuarth stated that they had adopted a "modular approach" to get it all up and running. "For instance," he said. "The AI logic is one component that we will get to a reasonably robust state, then separately the logic for the dynamics of the ecology. Then these components talk to each other in a formal way, interacting. So long as we carefully control the way they interact, we can avoid some of the more common issues." Neuarth would go on to affirm that the studio will, of course, also have to use a lot of "iteration and experimentation" to make sure the final product works the way it's supposed to. "We have over a half-year set aside to sort this all out," he said.

If everything goes to plan however, Neuarth is confident that all of the hard work being put into the Inspiration Engine will be well worth it in the end. "Instead of the designers scripting a set solution path for a player, the Improvisation Engine puts the problem solving in the player's hands," he explained. "We create an encounter; set up the monsters, traps, the physical layout, etc. Then the world simulation is turned on. A set of fairly complex interactions and dynamics take place of their own accord. The player comes into this dynamic mix, and can permeate this situation in a range of ways, some of which the designers may have never imagined."

Suffice it to say we'll be eager to see if OtherSide can achieve these lofty goals.