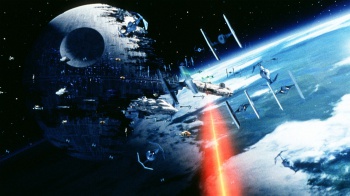 Star Wars: Lords of the Sith introduces the first canonical lesbian character of the new EU - and one of the few LGBT characers ever in the franchise.

For all of their massive galaxies, many science-fiction universes aren't as diverse as you'd think. Star Wars is a great example - for decades the galaxy far, far away only had one black guy, and people were still shaking their heads at the thought of a second wearing Stormtrooper armor. But the new Star Wars expanded universe is nipping that in the bud right away with an Imperial Moff who also happens to be a lesbian - making her the first official LGBT character in the new Star Wars canon.

"It's not something I really think about, it just makes sense," editor Shelly Shapiro said while discussing the upcoming Lords of the Sith novel. "There should be diversity in Star Wars. You have all these different species and it would be silly to not also recognize that there's a lot of diversity in humans. If there's any message at all, it's simply that Star Wars is as diverse - or more so because they have alien species - as humanity is in real life and we don't want to pretend it's not. It just felt perfectly natural."

The character - Moff Mors - is an Imperial officer who made "very serious mistakes" but is working hard to prevent complete disaster. She also just happens to be a lesbian, which from all descriptions seems to be a minor aspect of her character - at least in terms of what the reader is exposed to.

To be clear, this isn't the first-ever LGBT character in Star Wars history. "There was a gay Mandalorian couple, so it's not brand new," Shapiro said, acnkowledging a reference in the Legacy of the Force novels. Juhani from Knights of the Old Republic was also a lesbian, although interactions with female players were pretty minor compared to say, Mass Effect.

That all said, even if those characters weren't relegated to non-canon, they're still remarkably light for forty years of Star Wars history. Introducing these personalities - within one of the EU launch novels no less - may be an indicator that Lucasfilm won't ignore the perspective any longer. Star Wars: Lords of the Sith launches on April 28.

Source: Full of Sith, via Polygon