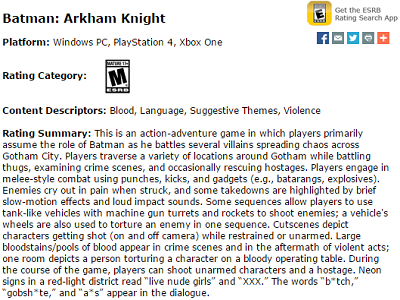 According to a summary from the ESRB, Batman: Arkham Knight will feature sequences of torture and give players the chance to visit Gotham's "red-light district."

At the end of February, Rocksteady Games confirmed that Batman: Arkham Knight would be receiving an M for Mature rating from the Entertainment Software Rating Board when it released in North America. What was unclear at the time were the exact reasons why. While the developers affirmed that the game would have a harder edge than its previous Batman titles, the ESRB had yet to release its official summary detailing the content that offended it most. If you've remained curious as to the board's reasons, you might be interested in checking out its newly released summary detailing what makes Arkham Knight worse than its T for Teen predecessors.

According to the summary, the game will include "blood, language, suggestive themes [and] violence." That might sound par for the course for the Dark Knight, but the picture becomes a bit grimmer when you delve deeper into the specifics. In addition to the usual bits of Bat-violence, the game will include a sequence where the player uses the Batmobile's wheels "to torture an enemy." There will also be several scenes with prominent "bloodstains/pools of blood" along with "one room [depicting] a person torturing a character on a bloody operating table." Interestingly, players will apparently also be able to "shoot unarmed characters and a hostage" as well as visit Gotham's "red-light district." Foul language will likewise appear in abundance, including words like "b*tch," "a*s," and my personal favorite, "gobsh*te."

Looking at the summary as a whole, it definitely appears as though Rocksteady founder Sefton Hill was telling the truth last month when he said that Akrham Knight will be going "to some dark places." Just speaking personally, I'll be interested to see what under what context Batman decides to run someone over with the Batmobile. It's not like it would be the first time the character went that extreme, but still. Yeesh.