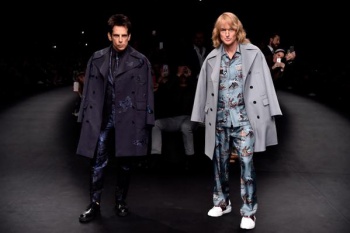 Derek and Hansel are so hot right now.

What's the best way to reveal a movie about two male models? At a fashion show, of course. That's exactly what Zoolander stars Ben Stiller and Owen Wilson did in Paris today at Valentino's Fashion Week show, appearing as their Zoolander characters Derek and Hansel to announce the long-awaited Zoolander 2.

The official Paramount Pictures Twitter account followed up the pair's appearance with an official announcement that Zoolander 2 would be hitting theaters on February 12, 2016. Given Stiller and Owen's stunt, we can assume that both actors will reprise their roles, and there have even been rumors that Will Ferrell will return as Mugatu and, Christine Taylor as Matilda Jeffries.

As for newcomers, Penelope Cruz will supposedly have a role in the new film, but we're not sure what it will be of yet.

Stiller has been optimistic about a Zoolander sequel for quite some time now, and some rumors have been circulating that he will start filming in Rome this spring.

The original Zoolander followed male model Derek Zoolander as he and his rival Hansel get wrapped up in a crazy conspiracy to murder the prime minister of Malaysia. We've no idea what the sequel will be about, but we can probably assume that Mugatu will be up to his old tricks again.