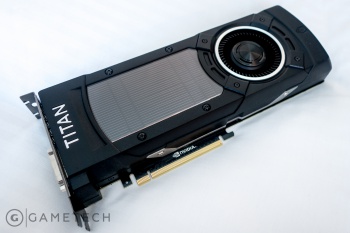 For the most enthusiastic of PC gaming enthusiasts, the Titan X is the mother of all graphics cards.

Building your own PC is part of the rite-of-passage to becoming a true PC gamer, and while most are happy with the mid-range components that keep their boxes similarly priced to gaming consoles, there is always a market for those who want the very best. Nvidia is appealing to that market with its new Titan X graphics card, boasting a whopping 12 GB of VRam, and a thousand dollar price tag.

The GTX Titan X comes out on March 18, and is quite a bit more expensive than its current $549 GTX 980, but on-par with the original Titan's launch price. Unlike the GTX 980, the Titan X sports a 384-bit memory interface, which shifts data 50 percent faster at 336.5 GB/sec. It's also the first GPU from Nvidia to make use of the GM200 core, which carries 8 billion transistors in a 28nm die.